Using iBeacons with Windows 10 - Part I

It’s been a while since my last post on the blog, but it was such a busy period and sadly my blog is not one of my main priorities. Would really love to find more time for writing.
This post is focused on “consuming” iBeacon devices around us and also configuring your device as an iBeacon using the newly added functionality in the Universal Windows Platform target Windows 10 Build 10240.
A little bit of introduction to the beacon/Bluetooth technology. The iBeacon functionality is built on-top of the Bluetooth Low Energy (BLE) and enables to create a region around an object. This allows client devices (Android, Windows, iOS) to determine when it has entered or left a region along with an estimation of proximity to the beacon. The BLE standard architecture (and not only) is a client-server one. The device that exposes the functionality is the server (in our case the beacon) and our device (phone, tablet) is the client. In order for a client to know that a server is in range the server advertise itself (sending bytes packages at certain intervals times on different radio channels). The battery life of an BLE device depends mainly of the advertising interval (this is because usually the device is idle and advertising). With one advertising packages each second the lifetime of a beacon device running on a CR2032 battery is about 1 year. The client on the other side is scanning the communications channels for Bluetooth advertising. 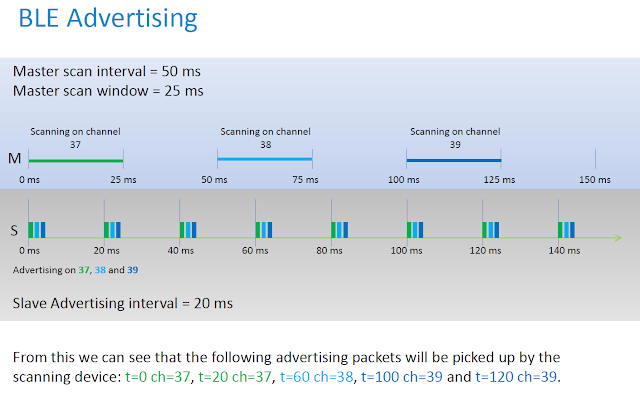 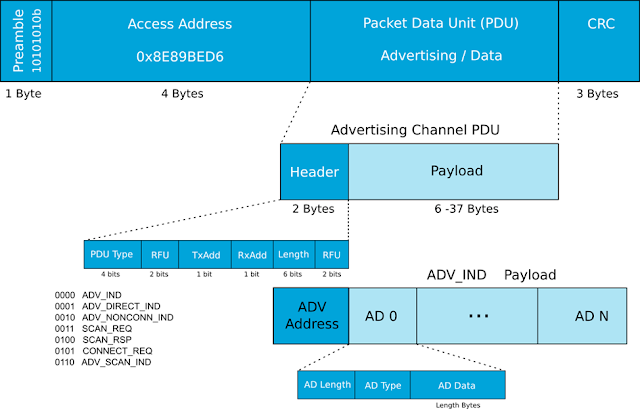 The PDU can have a length between 8 and 39 bytes where the first 4 bits is the PDU type. For this post we are interested in two types ADV_IND – Connectable Undirected Advertising meaning a device that is advertising and it can be connected to and ADV_NONCONN_IND Non connectable undirected advertising is a device advertising but not connectable. If you want to better understand the advertising package read this post http://j2abro.blogspot.it/2014/06/understanding-bluetooth-advertising.html and the complete list of AD Type can be found here: https://www.bluetooth.org/en-us/specification/assigned-numbers/generic-access-profile
So we could consider a Beacon any Bluetooth Low Energy that is advertising. The iBeacon (and EddyStone but that we will address in another post) is just a standard advertising package.

The structure of the iBeacon packages is:

The iBeacon prefix bytes are always the same:

The developers can configure for each iBeacon (using the tools that manufacturers provide) the UUID, Major, Minor and TX Power.
Here is how the advertising looks like from an Estimote iBeacon. The package was captured using Packet Sniffer from Texas Instruments:

As you can see the device can be connected to because the advertising type is ADV_IND but this is not always true. If you have a generation 1 Texas Instruments SimpleLink SensorTag with the iBeacon firmware flushed you can switch between “normal” mode and iBeacon mode and the device in iBeacon mode cannot be connected (it is only an iBeacon without any service). Here is the package captured by the sniffer:

Btw if you want to update the Gen 1 SensorTag to the iBeacon firmware you can follow these instructions. I haven’t compiled the source code but downloaded the firmware from this link. You will need an Android or an iOS device even if right now the TI application is broken for both Android 5 and iOS 9 (I had to roll back to iOS 8 in order to update the SensorTag firmware). If you look at the two packges you will see that the SensorTag is missing and ADV sequence 02 01 06 but because we are going to filter using the ManufacturerData we will still intercept this type of iBeacona correctly.
Also remember that the only Beacon standard supported by all the mobile platforms iOS, Android, Windows is iBeacon.  Windows 10 and Android can actually support natively any type of Beacon.

After the standard Prefix we have the actual data of the iBeacon:

You might find on some websites that the Tx Power length is 2 bytes but it is not true. The Tx Power is 1 byte signed.
For the tests and development, I have used both an Estimote beacon and the SensorTag with the iBeacon firmware.

So now let’s get back to Windows 10 and the new SDK. We now have support for:


IMPORTANT: even if a device advertises ADV_IND meaning that a client can connect to it the UWP Bluetooth functionality for Windows 10 build 10240 is still LIMITED because it can only connect to the device if it was previously paired with Windows. For the moment there is no way to pair to new devices from code so the application would open the Bluetooth window, the user have to manually pair with the device and then, when coming back to the application, we can connect to the device and enumerate services and characteristics.

If we want to monitor for iBeacons only in the foreground (while our application is running) we will use the BluetoothLEAdvertisementWatcher class.
IMPORTANT: when you create a new project in order to be able to interact with the iBeacons from your UWP project you have to open the Package.appxmanifest file and enable Bluetooth  Capability:

Using BluetoothLEAdvertismentWatcher we can monitor the advertisement packages from any BLE device around us. Of course this is a little bit excessive if we only want/need to monitor a certain class of iBeacon. This can be done using the AdvertisementFilter property of the watcher. To make things easier I have developed a small helper class (that hopefully will grow in time) that will actually set the BluetoothLEAdvertisment with the desired iBeacon sequence.

The extension method uses an iBeaconData class as input:

The Advertisement filter is not the only filter that you can set for the watcher. You can have a look at all the other parameters of the class on MSDN.
The other helper method, iBeaconParseAdvertisement, helps parsing the received advertisement package and retrieve the iBeacon data: UUID, Major, Minor, TxPower and Distance. The Distance is an approximate one and it is calculated using the TxPower (the Rssi level measured at 1m) and the actual Rssi level. To better understand why is hard to have a really precise value read this blog post about Fundamentals of Beacon Ranging  (on iOS devices the distance is more precise because Apple is the only manufacturer of its devices so he can tune the bluetooth chipset settings to have similar results on all the devices meaning the Rssi level measured on the iPhone at 1m would be almost the same for the iPad or iPod).
In the sample I have subscribed the Received event handler of the watcher an simply called the method iBeaconParseAdvertisement to get the iBeacon data.

Now let's see how we can scan for iBeacons from the background (while our application is not running). The SDK adds a new background trigger specific for BLE advertisment that is why it is called BluetoothLEAdvertisementWatcherTrigger. If you don't know how the background tasks work read read this: Creating and register a background task .
The main difference between scanning in the foreground and in the background from the BLE point of view is the minimum sampling period: when scanning in the foreground the value can be 0, while in background the minimum sampling interval is 1 second. We cannot have more than one event/second in the background. If more than one iBeacon has advertised in that period we will find all the advertisements packages using the Advertisements property. Remember also that the background task runs in a different process but in the same container (so the storage is shared).
Also in this case when setting the trigger I am calling the extension method that sets the filter for the advertisement data:


I've published the sample project on GitHub (here is the link ). The solution has 4 projects:
The next blog post will be on configuring the device as an iBeacon. We will look at the new publisher API.


I also recommend (if you have time) to watch the Build 2015 session of Kiran Pathakota :  Building Compelling Bluetooth Apps in Windows 10 .
Hope you've enjoyed the post!