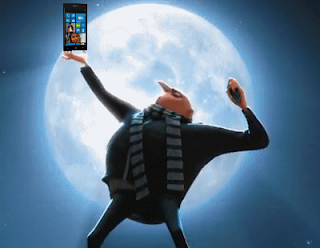 This post starts a new chapter of my blog: Windows Phone 8. I was waiting for some time to see what was Microsoft "cooking" in the next version of Windows Phone and last week, with the leak of an internal version of the development tools, I finally got a sneak peak into Apollo (aka Windows Phone 8). There are a lot of new topics and scenarios enabled by the Windows 8 core and I already have in mind my next posts (hopefully they will follow up shortly).
The two photo-montages are associations of ideas between Apollo and Windows Phone. The first one is from one of my favorites cartoons, Despicable Me. The second one is from a sketch of Georges Méliès, a great visionary, considered the second father of cinematography after the Lumière Brothers. I hope that Windows Phone will be able to catch up with iOS and Android and that the new phones will be really popular. 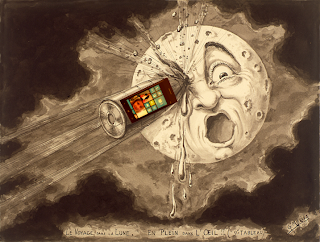