If you are developing an application for the Windows 8 Store it is very important that you test it on an ARM device (Surface RT, Asus VivoTab RT, Dell XPS 10,etc.) before sending it into certification. You will probably have some bad surprises and not everything that was fast&fluid on your development machine will continue to be so on an ARM device (the list scroll performance reminds me of the first version of Windows Phone). So you will have to simplify the layouts, animations and in some cases even rewrite part of your code. Parallel Programming is your friend if you can use it (for Kids' Orchestra I had the big problem that generating 100ms of sound output took more then 100ms so after 2 days of trying to optimize the C# source code I realized that I only had to use the Parallel.For and everything started working).
Due to performance differences you might need to split the user experience/code on different architectures (like disabling some animations on ARM). If this is the case it becomes very important to know the processor architecture on which your application runs. One solution would be to create 3 different packages of your applications and use the conditional compilation to differentiate between what happens on each architecture. If you still want to use only one package (Any CPU) it is enough to have a method that returns the processor architecture.
The bad news is that WinRT framework doesn't have any method/property that returns the processor architecture  (at least I don't know it). The good news is that you can still use GetNativeSystemInfo as it is an api supported for Windows Store apps (it is even supported for Windows Phone 8 apps): 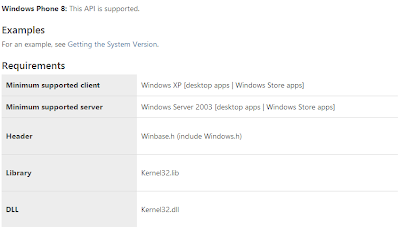 For Windows Store apps you can use two approaches to call this api:
1. Use P/Invoke -this is the one I opted for;
2. Create a Windows Runtime Component in C++ that you can then call from managed code - this is the approach you will have to use if you need to call this function on Windows Phone 8.

What I did is to create a public class, which I called CPU, and has one public static property NativeInfo that returns an SystemInfo object:

I have also created a small sample that will give you a list with your processor details. Here is the result I got on  my Surface: 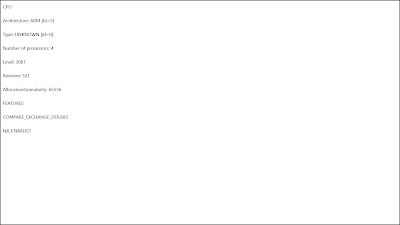 Hope you will find the class useful. Don't hesitate to contact me if you need further details.

Let's begin with a small introduction to XAudio2:
XAudio2 is a low-level audio API. It provides a signal processing and mixing foundation for games that is similar to its predecessors, DirectSound and XAudio. XAudio2 is the replacement for both DirectSound and XAudio.
XAudio2 abstracts audio generation by separating sound data from "voice", allowing each voice to be filtered by programmable digital signal processing and effects processing functions. Voices can be "submixed" together into a single stream. There is always only one Mastering Voice that outputs the result using WASAPI.

XAudio2 is primarily intended for developing high performance audio engines for games. For game developers who want to add sound effects and background music to their modern games, XAudio2 offers an audio graph and mixing engine with low-latency and support for dynamic buffers, synchronous sample-accurate playback, and implicit source rate conversion. Compared to WASAPI, XAudio2 requires only a minimum amount of code even for complex audio solutions. Compared to the Media Foundation engine, XAudio2 is a low-level, low-latency C++ API that is designed for use in games.
XAudio2 cannot be used for background music - for this task you will have to use the IMFMediaEngine. XAudio2 cannot be used for capturing audio - for this task you will have to use WASAPI. Do not use XAudio2 for media playback. For that task you can use MediaElement
XAudio2 is part of the DirectX api that is included in the new Windows Phone 8 SDK. The Api is shared between Windows 8 and Windows Phone 8 which means that you will be able to fully reuse your source code on both platforms.

If you want to use XAudio2 for your C#/VB/HTML code you have two options:
1. Use SharpDX . SharpDX is a wrapper of the DirectX Api under .Net platform. Theoretically you can use it to call XAudio2 api directly from your managed code. Practically what happens is that the .Net CLR/GC on ARM seem to block native threads so your audio will shutter/glitch in certain conditions. I had the same problem when I was developing our Windows 8 game Kids' Orchestra and the audio had glitches even on a core i7 processor.
2. The other option, which from my experience works better, is to develop an Windows Phone Runtime Component that will manage the XAudio2 part and expose the needed methods/events to the managed code.


To better understand how it is done I took the Windows 8 sample XAudio2 audio file playback sample C++ from MSDN and ported to Windows Phone 8 by splitting it in two projects: The C#/Xaml part for the UI and the "audio" project which is a Windows Phone Runtime component developed in C++. 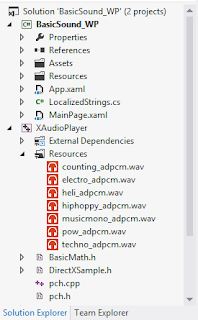 The porting was pretty easy. I only had to re-code the player class to make it "visible" to the managed code project and added an event that will tell you when a certain Source Voice has finished playing its buffer/sound (we have 7 sounds and each sound has a Source Voice associated to it). If you need further details on how to write a Windows Phone Runtime component in C++ have a look at this  MSDN Post


This sample only plays Wav files that are resources in the C++ project. You could also dynamically generate sounds in managed code and pass the Wave/buffer data as a byte[] to the runtime component. Inside the native code you will then generate an XAUDIO2_BUFFER and submit it to a Source Voice for playing. 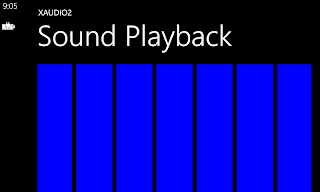 I have attached the SOURCE CODE for the Windows Phone project. If you have problems with it don't hesitate to contact me.