I saw today the Gartner chart with the smartphone market shares for the Q2 2010. What really impressed me was the "jump" Android did:

What it is interesting is that the iOS won 1% which I think it's the 1% RIM lost but everyone else lost market shares in favor of Google. Looks like it doesn't matter if you have the best OS on the market today(iOs) , but it's better to be "open" - good adoption from the hardware makers, a lot of developers/fans porting/improving/updating Android OS on hardware already on the market (almost every WM owner hopes for an Android port for their devices), wide range of prices for the hardware and developers that have almost everything that they need (multitasking, access to all the resources of the device, error reporting of the applications).
In fact I still don't understand why Microsoft "blocked" the multitasking in favor of battery life. Let full multitasking and then implement a mechanism inside the OS which warns/reports to the user how much an application "eats" in terms of processor/battery. The user can than decide if he sacrifices or not battery life for a certain application. It's always better to warn and let the owner decide than to decide for them. A lot of developers at WP7 Lab in Milano did not agreed with the new tombstoning mechanism but developers obey the rules which might not the case for the owners.
I expected/wanted so bad WP 7 to be perfect, complete from the beginning to have every functionality that it had but with the new UI/programming model instead now it has what it was missing before and misses what it already had. There is still much to be done to get back Microsoft back do to where it was two years ago in the smartphone market.
NAMASTE!
Pubblicato da Dan Ardelean a 23:13 3 commenti

No I didn't got lucky to have a dev device of my own. Last Wednesday I attended the WP7 Lab event in Milano and everyone wanted a dev device. We even tried to bribe Lorenzo to "forget" some devices in the bar, but as there was only 3 devices available and he had the same event the next day in Rome we didn't got lucky. Anyway I've spent some quality time meeting new people and testing the Samsung and LG dev. phones.
The first project that I've tested was the SqliteClient. Could be my impression, but there is a big difference between how an application looks&feels on the device and on the emulator (it looks a lot better on the device). On the speed part I did some tests on insert (the select/delete work almost identically) and here are some results:
Inserting 2200 Rows with transaction:
Emulator: 0.622 sec
L.G.: 3.35 sec
SAMSUNG: 3.244 sec
Inserting 600 Rows without transaction
Emulator: 7.067 sec
L.G.: 29.054 sec
SAMSUNG: 21.676 sec
On the beta release the device it's 4-5 times slower than the emulator. The Samsung it's faster as it has the storage on a microSd compared to the LG that has it on internal flash.
The other project that I've tested was the barcode reader. On both devices the test samples worked the same as on the emulator. When it comes to the integrated camera this is where the things get a little complicated. The camera app is one of those apps that the hardware manufacture will customize. None of the drivers had a macro function. The Samsung device had no settings to set, and the focus was pretty bad. The LG had the settings menu implemented and a better focus. Without the macro function it was hard to take a "clean" picture of a barcode but when the image was good the library works really fast and precise. I expect a lot on the camera part from HTC. I have to wait October and see.
One thing that got me thinking is when I've asked if Nokia is preparing a WP7 device they didn't say yes, but didn't say no also. It would be a nice achievement for both companies because Nokia does great hardware, but I've never liked Symbian and looking at the market shares they could take WP7 into consideration.
Namaste
Pubblicato da Dan Ardelean a 09:20 2 commenti

First of all I want to express my regret that I am not one of the 3.000 developers that received a WP 7 developer device (I read somewhere that there are more than 3.000 users that use Facebook from WP7). I really hoped to have a "real" device, but that's the way the cookie crumbles...
This weekend I had two days of WP 7 fun. What I've wanted to see was the use of ZXing in WP 7. There is already a C# port of the library in the ZXing trunk. Porting it to Silverlight it is quite simple (just have to replace ArrayList with generics lists and HashTable with Dictionary) more details here. So I've downloaded the latest csharp source code from ZXing trunk and compiled the library. This was the simple part because I wanted a "nice" test project. I've used the test images from the ZXing source zip as embedded resources and the gesture recognizer from Clarity Consulting this way the user is able to flick both direction between the test images. It was a project based learning because I've used MVVM and the application was following the pattern till I've ruined it with the CameraCaptureTask and PhotoChooserTask (I was not able to get them in the View Model because I don't receive the notification after I choose/capture a photo but if anyone of you can do it please enlighten me how it's done )
I cannot test CameraCaptureTask and PhotoChooserTask but maybe some of you, lucky enough to have a test device, can test it and let me know how/if it works (even in the beta dev tools the camera is poorly integrated with the apps - you will have to run again the app after selecting camera or photo and you should be able to see the selected photo in the central image of my app this way you can press the Decode button).
This is how the test project looks (don't forget to flick the image) 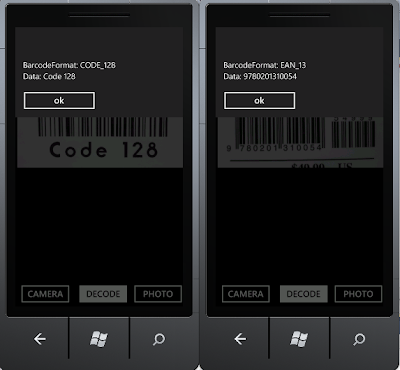 Here is the source code
Have a look also at this new post
NAMASTE
Pubblicato da Dan Ardelean a 20:10 14 commenti