More than a month ago some Microsoft guy in Asia made a terrible mistake and the LKG25 of Windows Phone 8 SDK leaked to the web. As I am not one of the lucky people that are the development program (as Mary Jo Foley suspected in a tweet and I believe it is true) I was more than happy when I got my hands onto the leaked version. At start I wanted to start blogging about the news that Windows Phone 8 will bring, but then I decided that it wouldn't be fair so I will wait until the official SDK. This post is not intended as a spoiler of any feature from WP8, but more like a proof of concept.
I am sure many of you read on twitter that the new emulator is a virtual x86 machine and it comes with the virtual hard drive (.vhd file) divided on the screen resolutions.
The idea came to me today while I was installing a clean virtual machine for development. Till now developing in a virtual machine for Windows Phone and debugging on the emulator with a decent speed/quality was impossible as you would have a virtual machines inside a virtual machine that degrades the performance exponentially. So what if you could have the development environment inside a virtual machine and then the emulator on another virtual machine that runs side by side and communicate on TCP/IP. In this case the performance of the emulator would be good (as it is not a vm inside a vm) and also the speed of the development environment would be acceptable. The virtual machine for the emulator would need 512MB or a maximum of 1GB.
So the first thing I did is to install a trial version of VMWare Workstation 9 (should work with VMWare Fusion and also Parallels/VirtualBox). Then I have used WinIMAGE to convert the Flash.vhd file to Flash.vmdk which is the format that VMWare uses and created a virtual machine where I've attached the newly created vmdk. 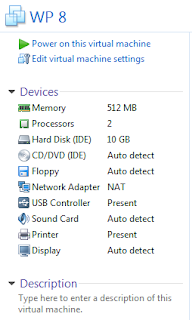 The good news is that the virtual machine works in VMWare right from the start. Not everything works (more decent is to say that some things work :) ) but hey it runs and I did nothing. The networking is not working but the most annoying part is the mouse pointer which is invisible in the virtual machine so I am blind pressing the mouse and at some point I am able to hit some buttons as you can see in the video :

P.S. Seeing that it is a virtual machine I beg the team which is in charge of the emulator to SAVE the emulator/virtual machine state between resets. It is really annoying to always start from 0 and none of the other major mobile platforms has this limitation.

Till next time NAMASTE to you my reader.
Pubblicato da Unknown a 22:46 6 commenti