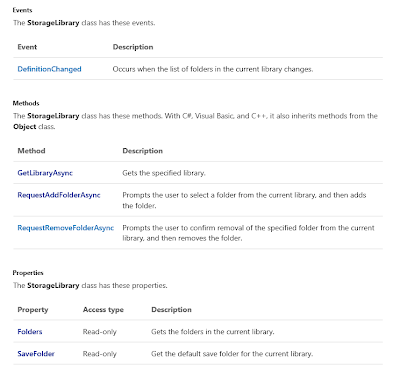 The usage is basic but it is exactly what I needed. You need to use the GetLibraryAsync method to retrieve the StorageLibrary you need. Once you have it you can retrieve the StorageFolders currently added to the library and for the Music and Videos libraries, you can add or remove folders from this library. If removing a folder from the library the user will be prompted if he agrees with the removal. For adding a folder using the async method the user will be prompted with a folder picker and returns the newly added StorageFolder, otherwise null.
As usually I really hope that, if you need it, this blog post will spare you the hours I've spent in finding out how it is done.

Update: There is also a code sample available on msdn Library management sample

What Windows Phone Start screen should learn/inherit from Windows 8.1

Last week I did a session on live tiles and it got me thinking on how Microsoft and the Windows Phone team could actually improve the Start screen experience and also the application list that, in my opinion, lacks design and more important it is not very practical to use. Please consider that i am not a designer and i did not have time to invest in doing the screenshots (did cut and paste using Paint.Net). I am doing this post just to illustrate my ideas.
Let me start with the start screen. The live tiles are an awesome feature and really differentiate Windows and Windows Phone from their competitors.  I think that, for certain functionality,the Windows 8.1/8 start screen is better than the Windows Phone one. First of all (and the most important) the Scroll Direction. The windows phone have the start screen in vertical compared to Windows 8 which is horizontal. Horizontal scrolling would be better and here are some reasons why I think this: 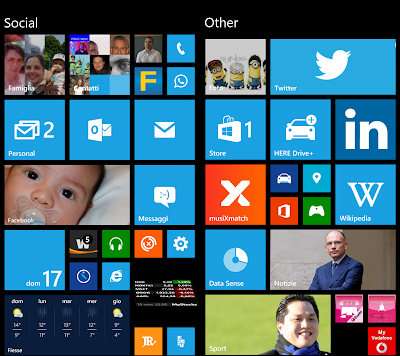 Other aspect where Windows 8.1 start screen is better is the tile templates. Windows 8.1, in comparison with windows Phone, has much more templates that fit better the needs of the developers. In Windows Phone you can actually build your own images with everything on it but it would be better to have more standard templates. The current templates when used "as is" are pretty limited:
If the Start Screen would be horizontal in this case the application list should be accessed by scrolling vertically just like in the Windows 8.1. The current design of the application list is not optimal it doesn't take advantage of the space it has and because of that you would have to scroll a lot. Even with the Jumplist it is a lot of scrolling. It would be actually better (in my opinion) a paged grid + Jumplist/semantic zoom to easily jump the pages+ Search to easily find an app. Grid design it would even scale better on higher resolutions as it could have more columns. Here is a small comparison (I repeat I am not a designer). Again paged scrolling would give you better speed than continuous scrolling. 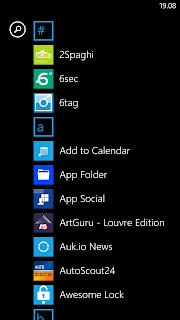 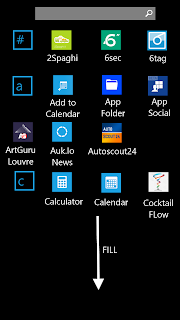 Near the search there could actually be a button that enables the user to change the grouping  (alphabetical, most used, recently downloaded,...).

If you read this post and have observations (maybe I am missing something) or ideas please let me know. There is always room to improve the user experience and my only wish is that Windows Phone get better and better each year.

UPDATE: And the most important when implementing horizontal scrolling, new templates apart from better functionality is better transition and familiarity (don't really find the right word) between desktop and phone

I've started thinking about this post a while ago when Windows 8.1 was still in preview (I actually did some testing at that time because I was really excited abouth this new "cool" scenario store applications) and after seeing this Build 2013 session: Apps for HID Devices.
As I did not had the cool missle launcher to play with I have chosen the XBOX360 Wireless controller connected to my PC using an USB adapter similar to this one. One of the reasons why I did this, apart from proof of concept post, is because I have some bluetooth toys that I like to "drive" using the Xbox360 controller (starting with version 8.1 we have full bluetooth support for the Store applications: SPP, OBEX, GATT/BLE ). The Xbox360 controller gives one of the best gaming experience, way better than any touchscreen, keyboard or motion controllers and also enables multiplayer gaming on the same device/screen.
In order to be able to connect to the Xbox controller we will need to find the VID, PID and UsagePage specific for our device. As I did not know these values I've used the HClient Sample application to retrieve them. To run the HClient sample you will need Microsoft Visual Studio 2013 and, more important, Windows Driver Kit (WDK) 8.1. HClient gives you detailed informations on all the HID devices connected to your PC and to easily find out which HID device is the one you are looking for just disconnect the device from the computer, look at the items inside the list, reconnect the device and identify the new device. This way I identified that my XBOX360 controller has VID: 0x045E, PID: 0x02A1, UsagePage: 0x1, Usage: 0x5  (there might be multiple hardware versions of the desktop adapter that might have different PIDs): 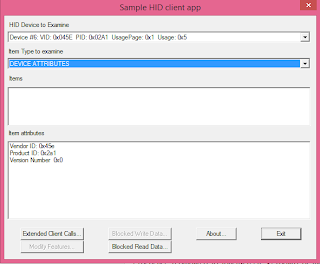 Selecting the HID Caps for the controller we will see that the input report is 15 bytes long and we don't have an output or a feature report available for this device. This is one of the reasons why, in this case, it would be better to use XInput instead of HID because it would give you access to the lights and the motors inside the controller.

Now that we have the needed values we can start to build our Windows Store application. The first thing we need to do is to set the necessary Capabilities that enable communication between our application and the Xbox controller (manually edit the Package.appxmanifest inside your project using the View code option). In want to know more about the options you can set read How to specify device capabilities for HID.

So I've have added:


This way we specify that we only want our application to communicate with devices that have VID 045E and PID 02A1.

Now that we have setup the capabilities we can try to find and connect to and Xbox controller. We will use HidDevice.GetDeviceSelector to generate the query that we will pass to the method DeviceInformation.FindAllAsync that returns an array with all the XBox360 controllers connected to our PC.

We can connect to any of the devices in the returned array using HidDevice.FromIdAsync by just passing the Id of the HID device. The first time we connect to a new device the user will be prompted to grant permission to the application to communicate with that specific device. Keep in mind that the user can later change the access permissions to each device using the Settings -> Permisssions flyout so you should always check why the connection failed (_device==null) and if DeniedByUser ask him to reenable access to the device. 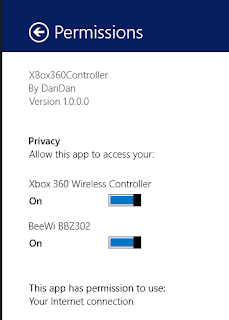 If everything went fine we are now connected to at least one Xbox360 Controller and we can subscribe the InputReportReceived event. The input report contain all the 15 bytes that we need and we can manually parse the bytes or, even better, we can use the defined structures. In our case we have 10 BooleanControls which are our buttons :


The usageId for the GetNumericalControl method are the ones listed under "INPUT VALUE" section in the "Sample HID client" app.

The Left Trigger and Right Trigger are returned as an unique numerical control value equal to LR-RT value. This is the second reason why XInput is a better choice for communicationg with the Xbox controller (using XInput you have distinct values for RT and LT).

Here is a screenshot from the attached sample application. 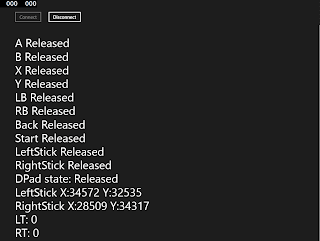