Email ThisBlogThis!Share to TwitterShare to FacebookShare to Pinterest
Etichette: WP7

Today, when I've changed my SIM card, I've noticed this screen on my iPhone: 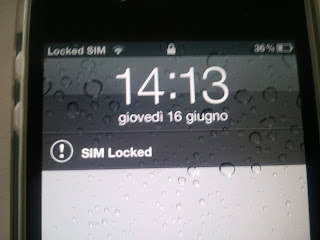 The icon seems more an WP7 icon then an iPhone one.  Good choice the Metro UI :)
Pubblicato da Dan Ardelean a 14:43 0 commenti

It's hard to start a post when it passed so much time from the last one. So much things to say but when you want to write about them you realize that are not so important/innovative/interesting or at least worth reading about.
I remember back in April at Mix Keynote when they presented the IE9 mobile edition that Apple was the worst performer in the tests. This is a small part of the Mix keynote where they show how the various devices perform:
So ever since April I was curious how much time will it take Apple to get back on the track with Safari mobile browser. Luckily I am the "proud" owner of an iOS developer account with no application published on the App Store (I will blame time and now Novell as I had to change my Macbook on which I had activated the Monotouch license and now it's GONE as nobody answers of that part anymore. I can only hope that Miguel and his team will "cook" a new product as soon as possible. All the money we've spent on Monotouch and Monodroid are now a dead investment). But let's get back to the post.... So today I've downloaded the first beta of the iOS 5 and deployed it to my iPhone 4 and ... SURPRISE... after not even two months the Safari browser outperforms Android and Windows Phone 7 (the way they were two months ago). Here is a small video with the test I ran:
I can hardly wait to be able to install Mango on my device and it seems that this could happen at the end of June for developers (keeping my fingers crossed). In that case Apple and Microsoft are definitely winning a small battle against Google. It is very important to give the tools developers need when they need them and this is not when the phones ship (being able to test on a real device it's a MUST). While for Apple it is an easy battle to win as they develop the hardware so they decide what to do, Microsoft on the other side has to convince the hardware OEMs and the mobile operators to let developers get early access to Mango and also find a way to make it "work" on all the Windows Phone 7 devices available today .
iOS 5 brings a lot of interesting new features and I agree that some of them are similar/inspired/copied from Windows Phone 7, but if that makes the product better Microsoft should copy and improve some of the iOS features. Here are some things that I still don't like in WP7 :
NAMASTE
Pubblicato da Dan Ardelean a 19:06 1 commenti