I was really excited a month ago when they announced Windows Phone 7 Series, but also disappointed because it looked unfinished. Yesterday when they released a CTP for Windows Phone development I was surprised that there is no local database support (in my opinion a step backward from Windows Mobile 6.5 and an essential feature for developing business applications).
What I've developed is a proof of concept application that implements Sqlite db engine inside Windows Phone 7 series. I've used csharp-sqlite developed by noah.hart and modified it to work with IsolatedStorage and WP7 Phone Tools CTP.
After some initial struggle with the library I wrote a simple test program: 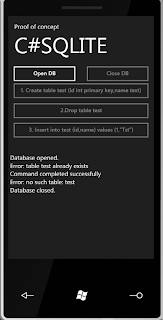 Hope you will find it useful...
csharp-sqlite.wp.zip
UPDATE: Use the updated version at http://sviluppomobile.blogspot.com/2010/07/wp7-sqliteclient-with-transaction.html
Pubblicato da Dan Ardelean a 03:00