This post and the next one will have nothing to do with development but will be about design choices that Microsoft made for WP 7 and I don't like.

The first one is the decision to eliminate Call and End call hardware buttons in favor of Back and Search buttons. It is a strange choice to me (maybe someone could explain to me why) because the buyer is mainly buying a phone so it will mainly use it for calling. Sure the iPhone has only one button and it's selling very well but this doesn't mean that it cannot be improved.

There are two important reasons why I think they should put back the Call & End call hardware buttons:

1. It is a phone and I want to access the phone immediately from anywhere in just one click. In this moment I need at least two clicks (Window button + Phone icon) which makes me slower.

2.Almost every phone user it's used to end the call with a button without even watching the screen.

The back and search buttons are also important, but why not put them on the sides? 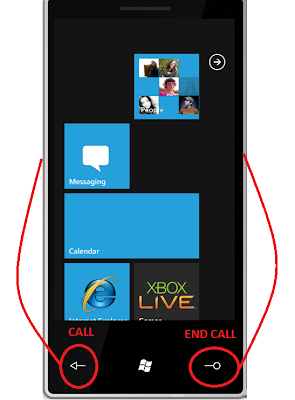 Off topic: What happened between HTC and Microsoft? Why isn't HTC one of the first 3 manufacturers? It is very strange as HTC was the only company that really innovated in the Windows Mobile area. Could it be because there is not much space left for innovation on WP 7 (from the manufacturer point of view) as it is a really closed OS for OEM? This way HTC won't be able to distinguish his phones from the ones produced by the other manufacturers! For LG (one of the newest manufacturers of Windows Phones), Samsung (never really created a best seller Windows Phone) and Asus (which is an old Windows Phone maker but never really invested a lot in this area) won't be a big problem if they will "share" sells of WP 7 , but on the other side more than 70% of HTC business is based on Windows Phone so they need to create "unique" phones that sell. Indeed lately HTC is releasing more Android phones than Windows Phones.
Pubblicato da Dan Ardelean a 22:50