Back in February I was really upset when they didn't show the phone interface of the new WP7. For me it is still the most important part of a Phone. Today, when I saw the videos published on Engadget I understood why... Not only that it looks unfinished, but it's like they didn't really start developing that part. Why did they invest a lot of work in the XBox Live hub (avatar movements with the accelerometer) and they didn't developed a decent CTP phone interface ? (it could be my impression but they focused too much on Zune aspects - Joe Belfiore was on the Zune team right? - I once said that it looks more like iPod Touch for the iPhone instead of the iPhone itself). Don't understand me wrong... I like a lot the new WP7 but it lacks so many things that it seems a step backward. I was disappointed when Microsoft launched WM 6.5 from a developer point of view (a year after the release of 6.1 there were not many new things added) but I always thought that they were investing everything on WM7. I think a lot of developers hoped for more as they are investing time and resources developing on Microsoft mobile platform (I don't think Microsoft can afford loosing developers on the mobile platform) 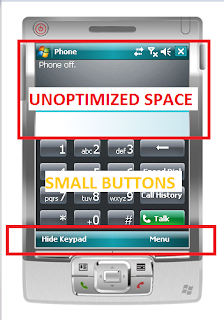 It is a really ugly phone interface (useless to say that it was released after WM 5 phone interface which was the same). Really small buttons that usually you will have to use the pen to dial a number, a lot of space used without being optimized, informations missing.
HTC understood that this interface was a real problem for selling massmarket devices so they rewrote the interface: 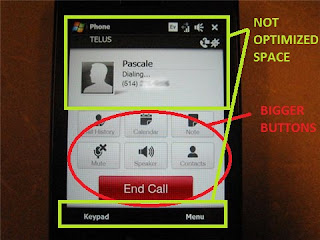 they used bigger buttons, better phone dial-pad, but still a lot of space was not optimized (also because of the OS that didn't let them to)
After they saw the "decent" phone interface developed by HTC Microsoft didn't learned too much and released in 6.5 a better interface than the standard in 6.1 but worse than the one created by HTC 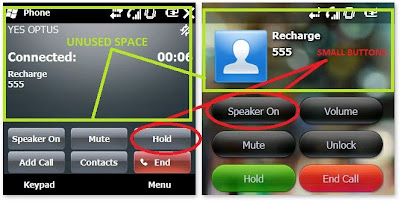 Why don't they learn from the iPhone or even Android? In my opinion the phone interface of the iPhone is the most usable one.

Really nice big buttons that you can press easily, essential information (I can always see the clock cause I want to know if it's not too late when I am dialing someone, or if someone calls me), the battery power and also the power of my radio signal. Nice modern UI. Anyway I think both iPhone and Android interface could be improved.

Let's see a little the WP 7 Phone interface as it is today:

The button size is ridiculous, a lot of unused space, essentially information missing. The only thing that I like is the dial-pad buttons. Remember that your potential client is buying a phone and after that everything that comes with it. If it isn't a decent phone he won't buy it.

I hope someone from Microsoft will read this post and start treating the phone interface as one of the most important pieces of the device (especially now that the OEM will not be able to personalize it). You got the background right (with silverlight you can develop awesome UI), so don't ruin it. We, developers, need that you get WP7 right as some of our work depend on it.